For inquiries regarding Shildan Press releases or other news or for a digital or paper copy of our press kit please contact us at: press@shildan.com.

Jury: “Love the way it fits into the city. [They] took an existing building and renovated it, and did a very beautiful contextual addition to it that stitched a city back together. It feels like they healed a scar on the site and they reconnected this portion of the city with the river.”

Architect: “The holistic parallel of who Mercy Corps is—their work pursuing sustainability socially, economically, environmentally—and finding a way to manifest that in the project really stood out. We worked to achieve the highest levels of sustainability along with the highest levels of design. These aren’t antagonistic values, they go together.” —David Keltner, AIA, principal and lead designer at THA Architecture

Portland’s historic Packer-Scott building is experiencing a renaissance as the new headquarters of the global relief organization Mercy Corps. THA Architecture reused 87 percent of the existing, neglected, 42,000-square-foot building, and added an addition over an old parking lot to expand the building’s size to 85,000 square feet. Working with the existing structure provided an unexpected benefit: seismic upgrades to the historic structure provided support to the addition and allowed for more open floor plans and exterior walls. And capitalizing on the urban location, the building features an Action Center, which houses interactive exhibits on relief and development work (Mercy Corps’ focus), and ground-floor meeting facilities to reinforce a connection with the community.

The building’s east-west orientation responds to the existing urban grid and allows smaller elevations on the east and west sides. The existing structure had small openings on the west and southwest that were kept, to reduce hot afternoon sun exposure. The south elevation is a combination of new and old: existing historic punched windows combined with new skin that employs similar glazing percentages. The addition features a terracotta rainscreen that complements the scale of the adjacent façades and is designed to be disassembled and reused if the building expands to the north in the future. Sunshelves on the storefront windows provide shade from the sun and shelter from the rain for pedestrians. The main entry’s glass wall in the middle of the south façade (which occurs at the so-called “knuckle” between the historic and new fabrics of the structure) is protected by electrochromatic glass louvers that automatically adjust based on outdoor temperatures. Passive ventilation techniques help cool the building as a main grand staircase acts as a ventilation stack, drawing air in from operable windows and up through a monitor-controlled clerestory.

The roof combines light-colored roofing with a 3,800-square-foot green roof to reduce the heat-island effect and also manage stormwater. Infrastructure for a future solar array was installed, but the PV system is not yet in place. When installed, the rooftop system will serve as a research case study for the University of Oregon to examine the relationship between solar panels and a green roof system to determine whether a symbiotic relationship exists. Future research aside, the building has already surpassed expectations: It was predicted to achieve an EUI of 43, but a survey done one year after occupancy reported an EUI of 36.

Potable water use was reduced by 40 percent by installing low-flow faucets and dual-flush toilets, and xeriscaping landscape plants eliminated the need for irrigation water. In addition, on-site paving in a small parking lot to the north helps manage stormwater. 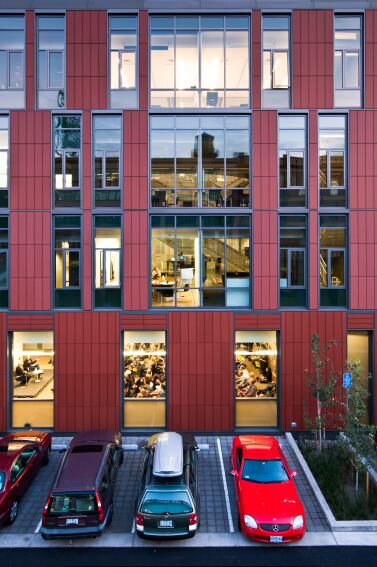